Clover is right at home in Carlsbad lawns. It and its look alike, Black Medic love Southeast New Mexico's temperate climate and extended growing season. And because of its perennial growth habit and rooting system, Clover is often one of the most difficult weeds to kill and control.

Again, because of Carlsbad's extended growing season, it can often take several herbicide treatments as well as other factors to completely eradicate it from your lawn. Aside from herbicide applications, we'll look at the other factors necessary for successful clover and black medic control.

Because of the heat and water restrictions in Southeast New Mexico, it's often difficult to grow a nice thick lawn in Carlsbad. And while some folks find clover to be a desirable addition to their lawn because, as they will often say, "it is green", most folks don't. So at least for the context of this article, we'll consider Clover (and Black Medic) to be a weed since the true definition of a weed is any plant that is growing where you don't want it to.

So at least for the context of this article, we'll consider clover (and Black Medic) is a weed since the true definition of a weed is any plant that is growing where you don't want it to.

The following information will be helpful if you plan to tackle the clover in your yard yourself control or if you plan to hire a professional weed spraying service.

Aside from the use of herbicides, the key to successfully managing Clover in lawns is a thick carpet of turf that chokes it out, a good fertilizer program with plenty of nitrogen and low phosphorus, and a lot of persistence. The growing season in Carlsbad is long. In most cases, weed spraying with herbicides alone will not kill Clover from your lawn. And definitely not in one treatment and one season.

Developing a timed herbicide application  program is necessary. However, it shouldn't be your only plan of action or main focus. As I point out over and over, your main goal and best defense against Clover and ALL WEEDS is a thick lawn with no room for weeds to grow.

So to start, and before a successful herbicide treatment program can begin, an evaluation of the overall health and state of the lawn is necessary. Some points to evaluate and get in order are -

I'll not get too technical here. While there is a lot of science and technical information behind herbicides, the growth habits of plants, and other areas, we'll stick to the most important basics of just getting Clover and other weeds out of your yard.

Interesting Weed Fact - Up until the 1950's, clover was a common addition to many grass seed mixes. This is one of the reasons it is still so widespread in lawns today. It was easier to maintain and stays low height. It was especially useful in large lawn areas like on the Eddy County Courthouse lawn and even some along the long stretch of the Lake Carlsbad Recreation Area.

Is It Really Clover Or Black Medic?

Before we go any further, it may be helpful to determine whether you have clover, black medic which is often confused as clover, or both. While there are a few differences in the weeds, they both can be successfully treated and respond to most common herbicides so it really doesn't matter. They're both troublesome weeds that can throw off the texture and appearance of your lawn. And it's just good to know the difference so that.....you'll just know.

This is Black Medic. It has the little yellow flowers. It is a long lived Summer annual that can last several years and through a few very cold seasons.

Let's start at the start and I'll say it again (I know, it's a bit repetitive). A thick stand of turf with plenty of constant nutrients is the best defense against weeds. This is especially true for plants like clover because it is a nitrogen fixing legume. It gathers nitrogen from the air and puts it back into the soil. It doesn't need or necessarily like a lot of nitrogen and is often a sign of a lack of nitrogen.

The soil around Carlsbad is typically very alkaline due to the limestone reef that helped form the Carlsbad Caverns. It holds very little nitrogen or other nutrients. So get on a good fertilization program to start. See - Fertilizing for weed control in lawns In Lawns 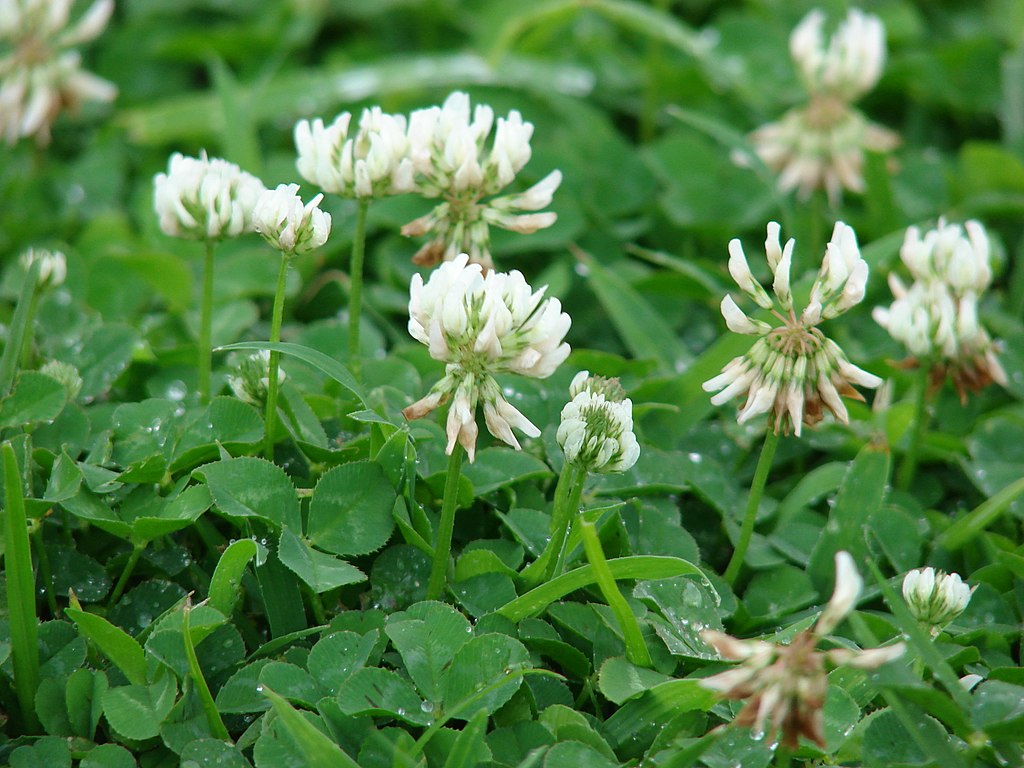 Also, clover has a lot going on at the root level so it likes a lot of phosphorus. So a high nitrogen, low phosphorus fertilizer will work best for combating clover.

This is White Clover.

In order to control clover it's important to understand the nature and type of the plant. It's a perennial. As well, Black Medic is a long lived annual so it can respond in the same way. That means that it comes back every year from the root as well as from seed. So while a pre emergent herbicide application may address the seeds, it won't touch the root growth. And if  a post emergent weed killer was applied, many of the plants that hadn't appeared yet, won't be affected either.

So, with that said, it's important to be constant and address it as soon as you see it. This is where a lot of attempts to control clover fail. A lack of persistence. If you're doing your weed control yourself, just keep some over the counter herbicide that's labeled for clover and black medic on hand and give it a squirt as soon as you see it.

Pulling it and digging it up is almost pointless. Unless you get every bit of the root system, it will just regenerate. Spray it so as to get it all the way to the root level.

When Is The Best Time To Treat Clover?

Fall is the best time to treat your lawn for clover. There are a few reasons for this.

As well, in the Fall, the plants are actively creating and sending lots of starches and sugars to the roots to store up for Winter dormancy. So of course, this is the best time to kill it at the root level.

At Horizon, we understand that professional services for something like this can be outside the scope of many budgets. It can take several treatments in one year and the other factors we've pointed out to get some yards to the point of fewer necessary treatments.

Part of the purpose of this article and our service is to help the folks in Carlsbad and Southeast New Mexico help us to have more successful results with our treatments. At Horizon Pest Control, our standard weed control service will address Clover and Black Medic. If you live in Carlsbad or other parts of Eddy County New Mexico and need assistance with Clover or other weeds in your lawn, give Horizon Pest And Weed Control Service a call today at 575-725-9331.